My daughter was at volleyball camp  and I had a rare afternoon alone with my son. I offered to go for a bike ride with him and get some ice cream.  He turned that down. Granted, it was raining a little.  Instead, he said he would like to draw comics together.  Did he see my eye roll? Did he hear my internal guffaw.  “I’m not a good drawer,” I told him.  Hello, where did my facility with the English language go? I wasn’t even going to consider the word artist.  So drawer it was.

To which he showed me

Thank you, Jedi Academy and your evil creator, Jeffrey Brown.  Ok, maybe not evil.  Maybe spot on. I want to encourage my kid to draw, right? But he wasn’t supposed to turn it around on me.  My self-imposed limitations have been a well-stitched-in part of my fabric for a while.  But I’m a mom and I can’t let my negative self-talk become his. Right? With my head in a defeated droop I follow him to the table where he is quick to the draw with a sheet of paper.

I grab a pen.  Yep, no eraser option. He’s all smiles and I’m all question marks.

He sees me staring at this blank paper and encourages me to start.

“Draw a fluffy creature who wants to make a friend.”

Oh, how it comes so easy to his imagination.

“I don’t know how to draw fluffy creatures.” Dang, a negative self-talk escaped when I wasn’t looking.

Abstract, I call it. Nothing with bodies. Floating heads are okay in my world. But a comic strip with characters and three squares to get to a punchline?  That’s a lot of pressure. AND my kid’s watching.  He went after the comics that are more like Marvel and I went toward my background with comics, the funnies in the paper.

He’s tearing through his paper.  Rounding out his first comic while I marinate, after explaining what marinate means.

I see he’s not going to let me off the hook so I draw a line for the first box.  He plays peek-a-boo with my paper while I get some ink on it. And he keeps cheering me on.

Here’s to my son who wouldn’t accept any of my excuses.  The next Peter Brown? video game designer? architect? oh the possibilities!

(Did you notice, ALL FOUR?, I couldn’t even think through one! AND the back of the paper is filled with Olafs.)

And, here’s to not giving up.  To turning off the inner editor that is screaming at everything I should’ve done differently. And to total vulnerability with those who are suffering to push past their comfort zones too. 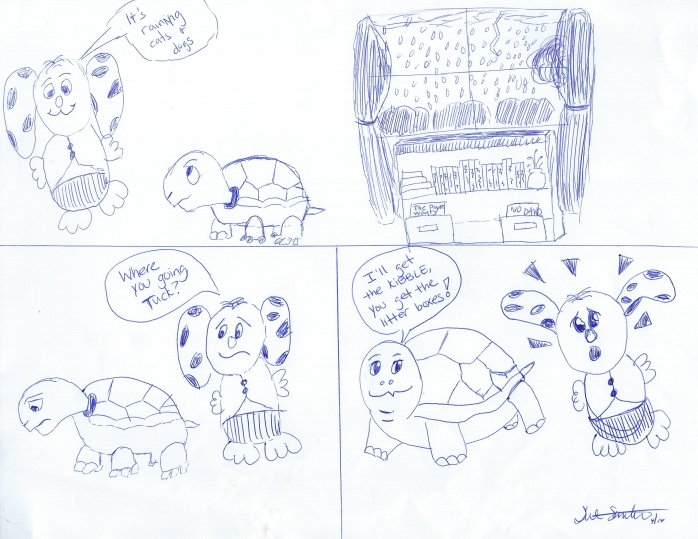